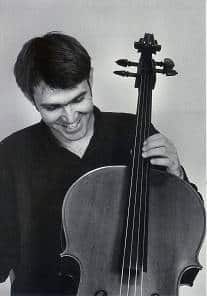 Simon is a well known and widely respected London based cello teacher and performer.

I have been using cellobabies with my younger pupils since september 2007 and find it both rewarding to use as teacher and well graded for younger pupils.

As a cello teacher I aim to give all my pupils a facility on the cello to create music to highest level possible, and give an understanding of how music is an expressive language that we can all participate in.

Simon started the cello at 6 years old and benefited from peripatetic, private lessons and local youth ensembles. He studied at the Birmingham Conservatiore, attending string teaching classes with Joan Foster. He continued his Studies in Italy at the “Scuola di Alto Perfezionamento Musicale”, studying the cello with Elizabeth Wilson. In recent years he has taken lessons from Mikhal Kaznowski, Philip Sheppard and David Smith.

He has taught in a wide variety of schools and enjoys most his teaching on the String Training Programme for the Guildhall School of Music.

He is an active member of the European String Association, currently acting as London Centre Secretary and serving on the National Management Committee.

His summers are spent touring with the Garden Opera Company, including trips to Kenya and the Caymen Islands, and he performs with the Helicon Ensemble and the Bernardel Piano Trio.

Simon on the internet