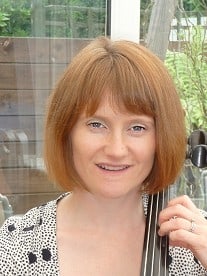 Sally Riddex is a well established cello player and teacher, based in Wokingham – which lies between in the Thames Valley between Reading, Didcot, Swindon and Basingstoke.

I find that the children really enjoy the songs and are keen to learn to play them.

I value the approach to teaching notation and find that it produces really competent readers.

Sally started playing the cello at age 8.  She studied music at Southampton University from 1993 – 1996 and the following year took a PGCE at Reading University.

Sally continued to study the cello with Amanda Truelove and Lowri Blake and went on to gain a Trinity College Teaching Diploma in 1996 and a Guildhall Teaching Diploma in 2001.  After a year of classroom teaching Sally became a full-time cello teacher working for Berkshire Maetros and also in private schools.

Sally is a keen performer and during the last seventeen years has been a free lance cellist playing for orchestras and shows and in chamber ensembles.  She has also given 3 concerto performances.  Since she became a mum in 2007 Sally performs less, however she regularly plays at wedding as part of the Donnington Quartet.

She has seventeen years of experience of teaching the cello to individuals, groups and even whole classes and has taught pupils ranging from age three to adult. She is really enjoying using the Cello Babies Method to teach her younger pupils.

Sally on the internet