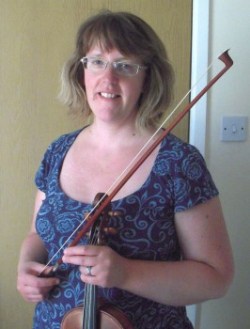 Rachel is a violin and viola teacher based in Chippenham, with pupils from aged three upwards, from beginner to advanced.

Violinbabies is a wonderful way for very young children to start a string instrument.  There are lots of engaging games to play with fun songs.  Learning to read music, rhythm and technique are all fun with Violinbabies.  It also teaches them general musicianship and encourages them to be free with their musical ideas.  Young children are able to achieve much more than we sometimes give them credit for and the youngsters I teach are really loving the fun of their lessons.

I believe that everyone can benefit from music in their lives and learning a musical instrument can help children blossom.  I aim to progress each student at their own pace and build the lessons to suit the individual.  I also believe that general musicianship is important alongside the instrument and aim for a rounded approach.  But ultimately, music is fun!

Rachel was born in London and began the violin at the age of three with Barbara Willis.  Aged eleven she went to the Royal College of Music, Junior Department where she studied with Gemma Farmer.  Rachel also studied Piano with Harold East, Chamber Music, Music Theory to Grade 8 with Geoffrey Govier and played with the Symphony Orchestra and has performed at St. John’s, Smith Square.  She also sang with the Chamber Choir and was among eight selected to sing with the Senior College under the baton of Sir David Willcox.  Whilst at the City of London School for Girls, Rachel was the Viola player for the School Quartet who performed at a number of City Livery Dinners and Functions including at The Guildhall and The Barbican.

At eighteen Rachel moved to Cardiff to study at the Royal Welsh College of Music and Drama under Prof. Dona Lee Croft where she gained a BA in Music and an Advanced Performance Diploma.  While there she was Principal Second and Co-Leader of the Symphony Orchestra and Chamber Orchestra, performing under many distinguished conductors.  Rachel was Principal Second for the Opera Orchestra under John Price Jones.

Rachel spent time freelancing in Wales with various orchestras and bands for Musical Theatre and Operas.  She was the Viola Player for The Medley Quartet performing for Weddings and Dinners, before returning to London to work at St. John’s, Smith Square.  Whilst in London she was the lead Violinist for The Archer Quartet who performed for Weddings, Dinners and Celebrations.  She also taught both Violin and Piano.  Rachel also played for the Westminster Philharmonic Orchestra.

Rachel moved to Chippenham in August 2013 where she is teaching privately and involved in local orchestral commitments.