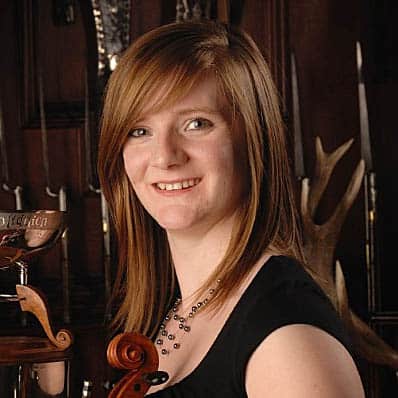 I am a Violin/Viola instructor with Aberdeenshire Council, I love my job and really enjoy seeing my pupils learn, perform, improve and have success with their string playing.  I began studying the violin at the age of eight.  Whilst at school I completed my classical violin exams, but I also became interested in playing Scottish Traditional music when I joined the Garioch Fiddlers in Inverurie – I enjoyed it so much that when the opportunity arose I became the conductor of the junior section for many years.

I aim for lessons to be fun and productive for the student.

I studied music at the University of Aberdeen and graduated with a BMus (Hons.) degree in Music with Education in 2009, as well as gaining a diploma in performance (DipABRSM) from the Associated Board of the Royal Schools of Music.

I have competed in many fiddle festivals throughout Scotland and enjoyed much success.  In 2010 I won the highly prestigious Glenfiddich Fiddle Championship at Blair Castle, having clinched the Oban Fiddle Masters Invitational Competition twice prior to that.

I have found success as a solo Scottish Fiddle performer and have travelled the length and breadth of Scotland and abroad as well as taking part in BBC Scotland’s Radio Broadcasts of ‘Take the Floor’.  I have played with numerous Ceilidh Bands and has also released my own Scottish Fiddle album – ‘Bennachie’ under my maiden name Nicola Auchnie.